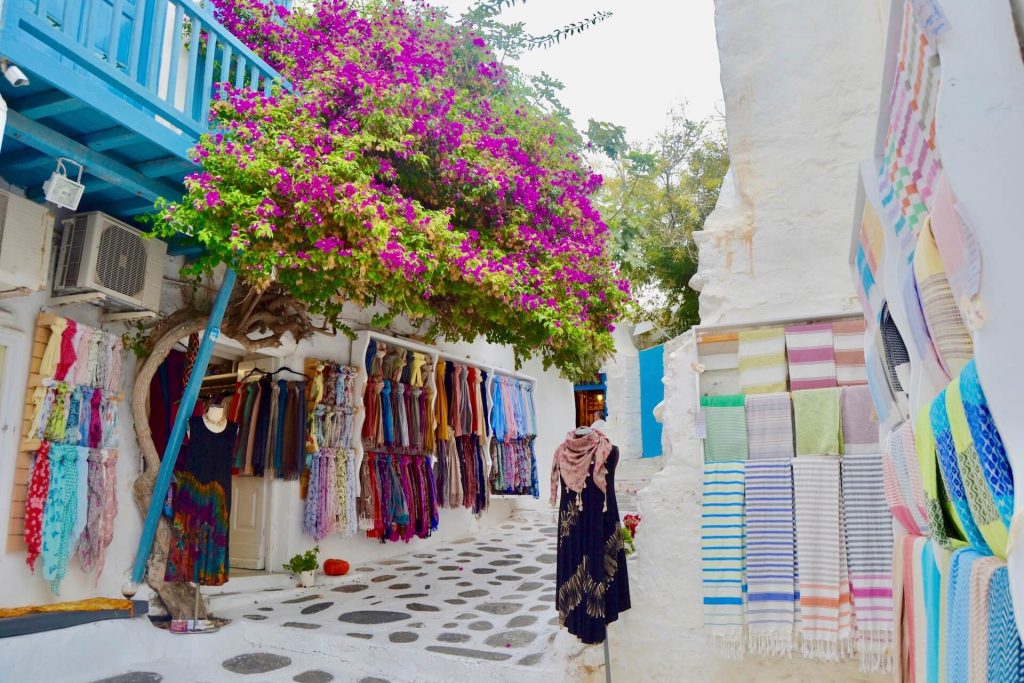 If you’re eager to travel to Mykonos and have the most wonderful, luxurious time, you’re in the right place. But, for anyone who plans to visit Greece and communicate with the locals, learning basic Greek words to get around is most recommended. Jumpstart your knowledge here with some essentials.

Learning basic phrases is crucial when traveling to Greece because it doesn’t just make it easier for you to ask for things and say what you want. It also shows respect for the local culture and people. Memorizing the basics won’t be difficult and will take you a long way.

Before learning how to speak it, we’ll introduce you to Greece and its language. Surprisingly, when some people ask where Mykonos is, they don’t know it’s not a country. Mykonos is an island in Greece in the Cyclades group. Its capital city holds the same name, which the locals simply call Chora (meaning “town”). The capital of Greece is Athens.

The language may initially look confusing and hard to figure out, but when you break down the sentences, it becomes easier. With the simplification of wording into syllables, you can easily remember the toughest sentences.

Some other things to remember are: use hand gestures when communicating and write everything down in a small notebook that you’ll carry everywhere. Locals will appreciate you for learning their mother tongue and likely be kinder and more hospitable.

Why Do You Need to Learn Greek Words Before You Travel to Greece?

Greeks are very tactile and use physical expression and affection. If someone leans in for a hug or kiss to greet you (of course, a waiter won’t, but an acquaintance might), don’t think of it as them trying to seduce you or be intrusive. Their nature is open and communicative.

Even with that openness, the locals won’t always offer to teach you their mother tongue. If you want to learn, you must ask. Foreigners that invest time and effort to learn the language of the country they travel to usually have a really good time.

Folks living on isolated islands don’t have the opportunity to speak English year-round. The most they hear is from tourists during the summer. Their life doesn’t revolve around serving tourists, either. They live there 365 days a year using just their mother tongue.

Don’t worry about making a mistake. A non-English speaker has the same issues yet tries their hardest to tell you what’s on their mind. Forget about feeling embarrassed or like a failure – there’s no such thing.

If you want to memorize more than just a few things to say, the video below introduces 300 words for beginners.

Basic Greek Words to Know Before You Travel to Mykonos

Without further ado, let’s start by filling up your ultimate travel itinerary and guide with some introductory sentences. If you’re keen to communicate with the Greeks, you must figure out how to greet them, say ‘yes,’ ‘no,’ and ‘thank you.’

These are essentials to use on the street, with the locals who do and don’t speak English, and when entering shops. It’s nice to have greetings in your arsenal, so when you get one right and put a smile on a local’s face, you’ll feel confident and more encouraged to learn other stuff.

Essential Greetings to Jumpstart Your Holiday

Even if you plan a short trip and want to learn what to do on Mykonos in two days, these sentences will guide you around the island.

The Most Common Phrases to Use in a Hotel or Accommodation

When you travel and arrive at your accommodation, the hoteliers or people in charge of the Mykonos villas for rental will probably know English. However, if you encounter anyone that doesn’t work at the front desk, you might have to gear up your knowledge of foreign languages.

Besides the usual kalimera, ne, ohee, and effhareestoe, the following sentences can be used:

If you look up the history of Mykonos and find some attractions you shouldn’t skip, you’ll have to ask for directions. You can ask the people at the hotel to guide you, hire a concierge service with The Ace VIP to never lift a finger, or go outside and manage with your map and phrasebook.

Here are the basics used when asking for directions:

Order Food at a Restaurant With Basic Words in Greek

The best international restaurants in Mykonos will use English as a communication tool because they’ll likely have more foreign, seasonal workers than local ones. Don’t count on this too much, but try preparing some basics, whether you plan to eat vegan food on the island or some traditional street delicacies such as gyros.

Here are the vital phrases used in restaurants:

The Essential Foods, as Said by the Greeks

You’ll need some essential foods to go with the phrases above, so here’s a chart of the most common ones, as said by the Greeks.

Communicate in Bars in Pure Greek and Seduce a Local

Finally, you can check out all the evening events on the island and have a drink at all the best bars, but you’ll definitely seduce a local if you speak their mother tongue with them. If you get tangled up, they can help you say what you really want. It’s all about having fun and making an effort to talk to everyone equally.

When you find yourself at a bar, you can use some (or all) of the following:

Don’t Worry, You Won’t Need Greek When You Book One of the Private Villas in Mykonos With The Ace VIP

Understandably, some folks don’t want to be in touch with the locals so much but enjoy the sights instead. If you want to rent one of our luxury villas on Mykonos or you need a car around the island, we can help you hire a private driver with our car hire service. You won’t have to try hard to talk to your driver, but we recommend carrying a dictionary just in case.

The Ace VIP can make your trip easy, luxurious, and unforgettable. If you don’t want to try too hard with the locals but still enjoy as much as possible, we can help you find the best Mykonos villa, rent yachts, party like it’s 1999, and have the time of your life.